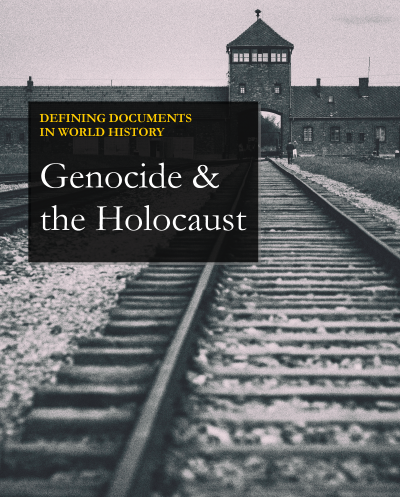 Genocide is the deliberate destruction of a national, ethnic, or religious group. While this has occurred throughout history, one of the most well-known genocides is the holocaust of WW II -- Nazi efforts to eliminate millions of Jews, while also persecuting Poles, Rom (Gypsies), and other groups.

Before them, the Armenians suffered a similar fate under Turkey. More recent examples of genocidal action are the “ethnic cleansing” that took place under the Serbs in Bosnia and Kosovo; the Hutu slaughter of the Tutsi minority in Rwanda in 1994; the attempt by the Islamic State in Iraq to eliminate the Yazidis; and the mass killing and expulsion of the Rohingya in Myanmar. China’s attempt to erase the culture of the Uighurs is a case of ethnocide -- a genocide component that exterminates national cultures. In the America’s, too, genocidal campaigns were waged against Native American peoples.

Ancient and modern documents are examined in-depth throughout these two volumes, including:

Designed for high school and college students, the goal of these volumes is to carefully study genocide throughout world history, to give students a frame of reference on how to understand and comprehend what has happened in our past, and what to be aware of in the future.