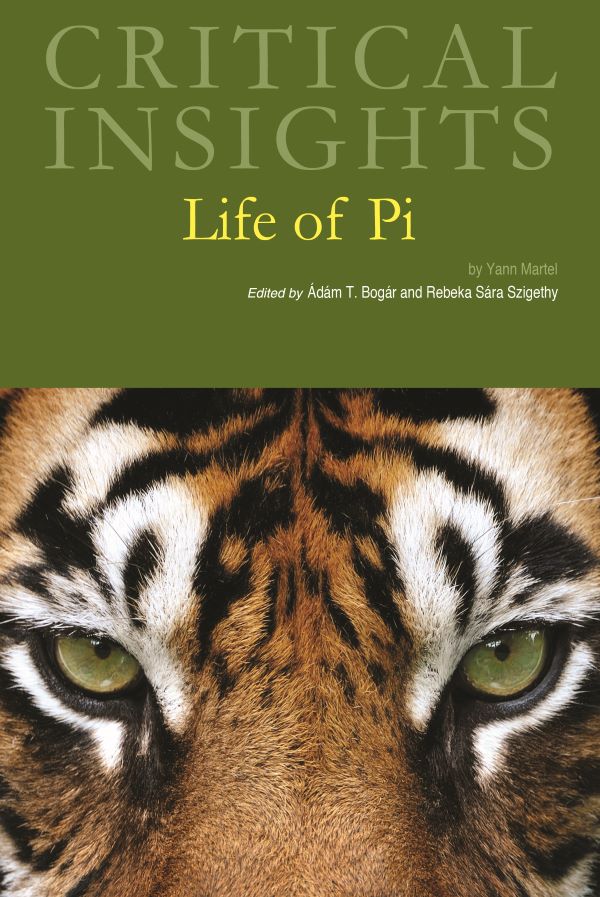 Yann Martel’s 2001 novel Life of Pi earned him the Man Booker Prize and also served as the basis for the critically acclaimed 2012 movie of the same title. The essays featured in this volume survey the novel’s critical reception, discussing topics ranging from narrative techniques through religion and philosophy to the cultural role of zoos, and also provide a brief introduction to the author’s life and work.

This volume, like all others in the Critical Insights series, is divided into several sections. It begins with an introductory piece, “On Life of Pi,” by volume editors Ádám T. Bogár and Rebeka Sára Szigethy, which offers a comprehensive introduction to the titular novel and its multifaceted interpretations. This is followed by a Biography of Yann Martel, written by Gerardo Del Guercio.

A collection of four critical contexts essays are intended to treat the novel (1) from a historical vantage point, (2) in terms of its critical reception, (3) using a specific critical lens, and (4) by comparing and contrasting it with another important work. This section opens with an article by Nicolae Bobaru titled, “Life of Pi: A Postmodern Castaway Novel Transcending Boundaries,” followed by a piece written by volume editors Ádám T. Bogár and Rebeka Sára Szigethy, “’…Faith in the Act of Storytelling’: The Critical Reception of Life of Pi.” This essay focuses on the critical responses, including early reviews from the novel’s release to later and more reflective critiques. The following two articles are written by Ester Láncos and Shu-Jiang Lu respectively. The first, “Survival through Meaning: Reading Life of Pi through the lens of Logotherapy,” offers a particular critical lens by examining the novel through the lens of logotherapy, or the concept that the principal motivation of an individual is to look for the meaning of life. The final essay, “Life in Stories: Narrated Time in Life of Pi and To Live,” compares and contrasts Yann Martel’s and Yu Hua’s novels.

In the final section, Resources, easy-to-follow lists are provided to help guide the reader through important dates and moments in the author’s life. A selection of further reading is then provided. Each essay in Critical Insights: Life of Pi includes a list of Works Cited and detailed endnotes. Also included in this volume is a Chronology of Yann Martel’s Life, a list of Works by Yann Martel, a Bibliography, biographies of the Editors and Contributors, and an alphabetical Index.

The Critical Insights Series distills the best of both classic and current literary criticism of the world’s most studies literature. Edited and written by some of academia’s most distinguished literary scholars, Critical Insights: Life of Pi provides authoritative, in-depth scholarship that students and researchers will rely on for years. This volume is destined to become a valuable purchase for all.